David A. Chesler, MD, PhD, FAANS, FAAP is rated at Stars from reviews

Although many of these specialists work directly with Dr. Chesler in the pediatric neurosurgery program, others come from the hospital’s many diverse programs and departments, such as the 12-bed PICU, which can provide intensive monitoring and the provision of critical care medicine to patients after surgery.

“Patient outcomes aren’t only affected by our ability to deliver results in the OR,” Dr. Chesler says. “They are very much dependent on the ability of our excellent nurses and intensivists in the PICU to provide the medical care and support patients’ needs after surgery to help them recover.”

CT scans account for just a fraction of the imaging technologies available to Dr. Chesler and the pediatric neurosurgery program.

“We have MRIs, diagnostic catheter-based angiography and spectroscopy scans as well,” Dr. Chesler says. “All of these imaging modalities help everyone within the hospital make the proper diagnoses while also providing me and other surgeons with enough anatomic information to effectively perform surgery.”

The National Association of Epilepsy Centers (NAEC) recognizes four levels of epilepsy care and provides accreditation for Levels 3 and 4 epilepsy centers. The Stony Brook Comprehensive Epilepsy Center at the Stony Brook Neurosciences Institute is recognized as a Level 4 epilepsy center, which means it meets the most stringent guidelines of the NAEC and can provide extensive medical, neuropsychological and psychosocial treatments, including vagal nerve stimulation, laser ablations, and surgery, in addition to intensive neurodiagnostic monitoring.

“I perform surgical treatments on the pediatric side while my colleague focuses on adult epilepsy,” says David Chesler, MD, PhD, FAANS, FAAP, board-certified pediatric neurosurgeon and Director of Pediatric Neurosurgery at Stony Brook Children’s Hospital. “We also offer intracranial electrodes for the evaluation of patients with epilepsy provided in conjunction with our pediatric epileptologist.”

Whenever possible, Dr. Chesler prefers to use minimally invasive techniques to address his patients’ pathologies. In many instances, this approach allows for smaller incisions, reduced hospital stays, quicker recovery times and decreased pain.

“In particular, I try to perform procedures endoscopically to treat craniosynostosis,” Dr. Chesler says. “This method is comparable or faster than an open procedure, which often requires a weeklong stay in the hospital and a blood transfusion. Fewer than 10 percent of patients require blood transfusions using the endoscopic method, and most patients can go home the next day.”

To remove deep-seated brain tumors, Dr. Chesler operates through a small craniotomy using a tube-style retractor, which allows him to reach the tumor without majorly disrupting surrounding brain tissue. This is an effective method to preserve white matter tracts in the brain. The surgery takes longer to perform than an open procedure, but the lowered complication rate and minimal damage to healthy brain tissue are well worth the trade-off.

“We’ll examine the MRI after surgery and see a hole where the tumor used to be,” Dr. Chesler says. “But it’s almost impossible to see the path we took to get there.”

However, Dr. Chesler and his colleagues can choose open surgery when appropriate.

“There are times when open surgery may be equally beneficial, or more so, than minimally invasive surgery,” Dr. Chesler says. “It’s important for me to have multiple tools at my disposal and conscientiously choose which ones to employ.”

“I couldn’t do what I do without the help of physicians, nurses, ancillary staff, case workers, social workers and Child Life specialists who work with me,” Dr. Chesler says. “We treat our patients as if they were our own children.”

Surgeons at Stony Brook Children’s Hospital have performed the first known surgery of its kind in the world on Long Island, NY, triplets whose skulls fused prematurely.

First-time parents Michael and Amy Howard of Center Moriches found out shortly after the birth of their triplets, Hunter, Jackson and Kaden, on Oct. 22, 2016, that all three baby boys were born with a skull condition known as craniosynostosis — a congenital premature fusion of one or more sutures (joints) on a baby’s skull.

The triplets, who were born at Stony Brook Children’s Hospital, were seen soon after birth by David A. Chesler, MD, PhD, Assistant Professor of Neurological Surgery and Pediatrics at Stony Brook University School of Medicine. Dr. Chesler is an expert in craniosynostosis.

Jackson and Hunter, who are identical, had what is known as sagittal synostosis (a long and narrow-shaped skull), while Kaden, the fraternal triplet, had what is called metopic synostosis (more triangular in shape). After CT scans were performed on each of the triplets, Dr. Chesler determined that all three triplets were excellent candidates for minimally invasive endoscopic craniosynostosis.

“The skull is not one big bone — it is made up of several plates,” said Dr. Chesler. “There are sutures (joints) between those plates that allow the skull to have a normal shape and size."

"When one or more of these plates fuse prematurely, the growth of the skull is restricted, resulting in an abnormal head shape and increased pressure exerted on the brain," he said. "If it is not surgically treated, there is a risk of injury to the brain and vision.”

While craniosynostosis itself is not all that uncommon — there is approximately one case in every 2,500 live births — the odds of triplets having the condition is extremely rare. In fact, the probability of seeing this occur in triplets again is one in 160 trillion.

With endoscopic craniosynostosis surgery, blood transfusions and incisions are minimal compared to open surgery, where blood transfusions are the norm and the incision can be six inches or longer. Endoscopic craniosynostosis operations typically take between 80 and 180 minutes, which was the case for each of the Howard triplets. And the average hospital stay is just one night. By Jan. 7, Kaden, Hunter and Jackson were ready to go home with their parents.

During the operation, Dr. Chesler with the assistance of Elliot Duboys, MD, Associate Professor of Surgery at Stony Brook University School of Medicine, made very small, one-and-a-half to two-inch incisions  (compared to approximately six inch or longer incisions, had it been an open surgery) to endoscopically remove strips of bone.

Key to the success of endoscopic craniosynostosis surgery, is the use of a specially designed helmet post-operatively, to help mold the skull into a “normal” shape and aid in keeping the areas of removed skull from closing too quickly. Without the use of a helmet, the sutures would refuse in a relatively short period of time and the skull would resume growing abnormally.

Fast forward to May 2017, and Kaden, Hunter and Jackson are now six months old and doing great, hitting all of their developmental milestones. They wear their helmets 23 hours a day/seven days a week, to continue to help guide and mold the shape of their skulls. They will wear their helmets for another three to six months and are expected to do exceedingly well.

Update on the Howard triplets, January 2018. 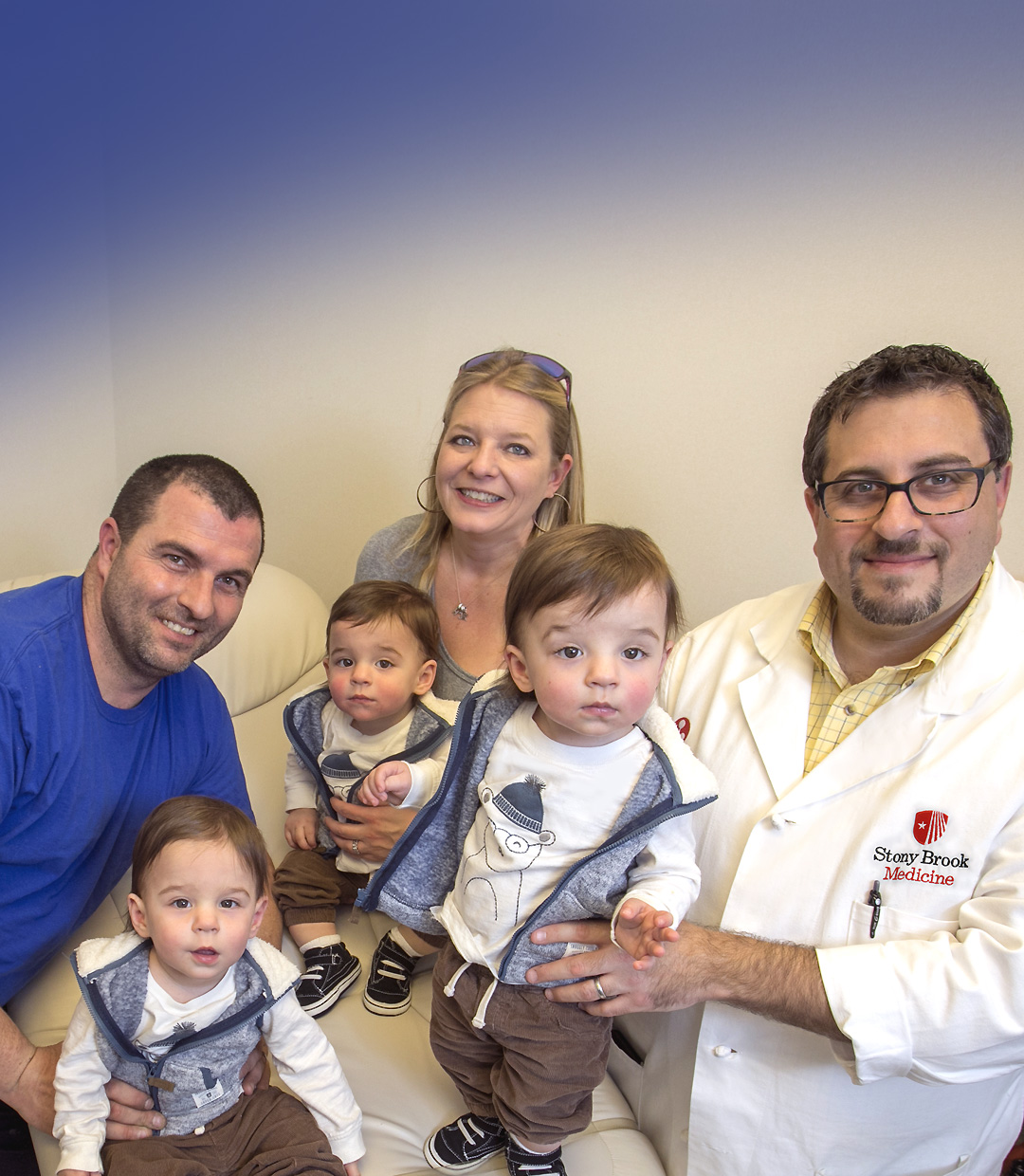 Read more about the triplets