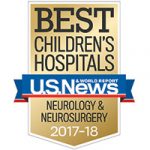 At Le Bonheur, building a comprehensive craniofacial program involved formalizing a team of dedicated plastic surgeons, neurosurgeons, dentists, oral surgeons and other specialists, each who focuses on treating various skull and facial deformities.

Today, the program includes specialists from neurosurgery, plastic surgery, dentistry and oral surgery and attracts patients from across the country.

“We have a multidisciplinary program at Le Bonheur that offers state-of-the-art management for people with craniofacial deformities so that families who have children with these problems can be evaluated and get the care that they need,” Boop said.

Although there’s no known cause, craniofacial deformities vary from craniosynostosis, microcephaly, congenital ear malformations, cleft palate and lip, hemifacial microsomia and more. Annually, more than 7,000 children are born with a cleft lip or palate, according to figures from the Centers for Disease Control and Prevention, and make up a majority of all craniofacial deformities.

Many of the facial and head deformities can be treated with surgery, including a craniectomy or implanting distracter plates. Surgeries are more than just cosmetic, however. The medical procedures also can help children with breathing disorders, speech impediments or feeding issues. In less serious cases, non-surgical positional molding has proven to be an effective method to reshape the skull.

Most Le Bonheur craniofacial patients have surgery when they are between 6 to 12 months old, Wallace said. Annually, Le Bonheur performs more than 40 craniofacial surgeries.

“For someone born with a facial deformity, they may need a plastic surgeon fix the facial skeleton but they may also need dentistry or oral surgery to make sure their teeth are properly aligned,” Boop said. “Or the patient may need surgery to fix the jaw so they can swallow properly or sometimes they may have problems with sleep apnea because their airway is compromised.”

Because of the complexity of reshaping the skull or correcting a facial deformity, it takes a coordinated effort between Le Bonheur’s neurosurgery, plastics, oral surgery and dentistry teams to provide children with the best possible outcomes.