Nathan Ranalli, MD, is rated at Stars from reviews

Nathan Ranalli, MD, FAANS is a board-certified pediatric neurosurgeon and an assistant professor in the University of Florida College of Medicine – Jacksonville Department of Neurosurgery.

Dr. Ranalli earned his medical degree from the University of Pennsylvania School of Medicine in Philadelphia after receiving a bachelor’s degree in neuroscience from the Johns Hopkins University in Baltimore, Maryland. He completed a residency in neurological surgery at the University of Pennsylvania, followed by a fellowship in pediatric neurosurgery at St. Louis Children’s Hospital/Washington University School of Medicine in St. Louis, Missouri.

Two brain surgeries in one day 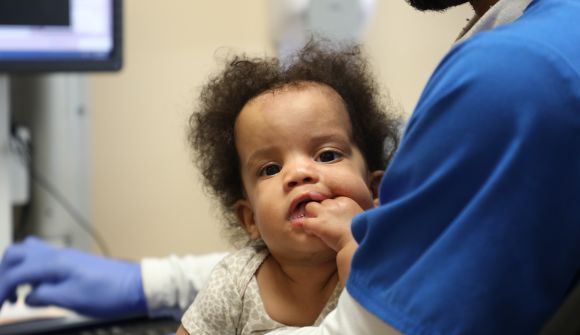 When a mother looks into her baby girl’s eyes, there are many things she might imagine. Will this tiny bundle play sports or prefer the arts? Who will be the lucky person she someday marries? When Miriam Simmons looks at her 9-month-old daughter, Mya, she imagines one thing that seems so simple.

If Mya could talk, she’d tell you about her journey that began weeks before she entered this world. At a 30-week ultrasound, Simmons, who then lived in Tallahassee, was told her baby had a mass on her brain. The “mass” turned out to be hemimegalencephaly, a disorder that causes one half of the brain to be larger than the other, leading to seizures.

In the weeks that followed, Simmons and her husband, Alex, made a plan on where to deliver and a course of action to follow after, but Mya decided to come early, forcing them to adjust.

Mya was born at a hospital in Tallahassee on October 1, 2018, and almost immediately started seizing. She was transported via Kids Kare Mobile ICU to Wolfson Children’s Hospital of Jacksonville and directly admitted to the Level 4 Neonatal Intensive Care Unit, where she remained for a couple of weeks. Simmons, who was recovering from a cesarean section, had to stay behind for 24 hours before following her baby girl to Jacksonville.

After Mya was discharged, Simmons noticed something still seemed off about her baby.

“She was having these little episodes, I couldn’t really tell what they were,” Simmons said. “When we came back to Wolfson Children’s in November for a follow-up appointment, they did another 48-hour electroencephalogram (EEG), which measures brain waves and electrical activity in the brain. They said it looked like a seizure.”

Alexandra Beier, DO, pediatric neurosurgeon with the UF College of Medicine – Jacksonville and neurosurgical director of Wolfson Children’s Pediatric Epilepsy Program, said that because seizures caused by hemimegalencephaly are known to be unresponsive to medication, surgery is often necessary.

“The surgery to address her seizures is termed a hemispherotomy.  This is a long procedure, as you need to identify the connections between the cerebral hemispheres, and disconnect them,” said Dr. Beier. “With the length of surgery, blood loss and the general risks of anesthesia, the patient’s size is very important.  With Mya, we delayed surgery until she had gained enough weight to tolerate the surgery.” 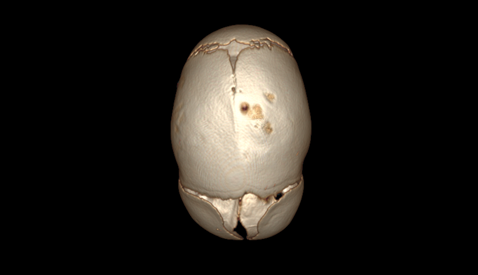 Further complicating Mya’s care plan was the discovery that she also had craniosynostosis, the premature fusion of one or more of the sutures (growth plates) in the skull. It occurs in about three of every 10,000 live births worldwide.

“In addition to the progressive head shape abnormality and impairment of normal brain growth that occurs over time, patients with craniosynostosis are at risk for developing signs and symptoms of increased intracranial pressure such as headaches, visual impairment and nausea if left untreated,” said Nathan Ranalli, MD, pediatric neurosurgeon with the UF College of Medicine – Jacksonville and neurosurgical director of Wolfson Children’s Craniofacial, Spasticity and Brachial Plexus Programs.

The solution would be a revolutionary set of surgeries never before performed simultaneously  at Wolfson Children’s Hospital, thanks to a collaboration and a great deal of planning by Dr. Ranalli and Dr. Beier.

On April 18, 2019, Simmons, who had moved with her family to Clay County, took then-6-month-old Mya to Wolfson Children’s for what would be a more-than-13-hour surgery.

“They were wheeling her away and her little body didn’t even take up half the bed,” Simmons recalled. “I’ll always remember how she just looked so little.”

Both surgeons began the procedure together. Then, Dr. Ranalli performed his portion to treat the craniosynostosis by removing the bone at the top of the skull where the sagittal suture, which runs through the center of the skull from front to back, had prematurely closed. Then, Dr. Beier performed a peri-insular hemispherotomy, in which she disconnected the left half of the brain from the right.

“There are several points of connection from one hemisphere to another,” said Dr. Beier. “The goal is for the abnormal brain where seizures are arising from to be physically disconnected from the brain that is not having seizures. Therefore the abnormal brain may still have abnormal activity but it can’t affect the healthy brain because it’s no longer connected.”

Mya recovered well following surgery and was able to go home after a weeklong stay in the Pediatric Intensive Care Unit and the Neuroscience Unit at Wolfson Children’s. She has been seizure-free since surgery.

“She’s able to finally hold her head up and do those things that she wasn’t able to do before,” Simmons said. “She’s a funny little one. She laughs at everything, she’s so happy.”

Mya will have to wear a customized helmet 23 hours a day, seven days a week for the next year to help reshape her skull from the craniosynostosis. As for the seizures, Dr. Beier said she is cautiously optimistic until Mya is completely weaned off seizure medication, a lengthy process that won’t start for another year or two. 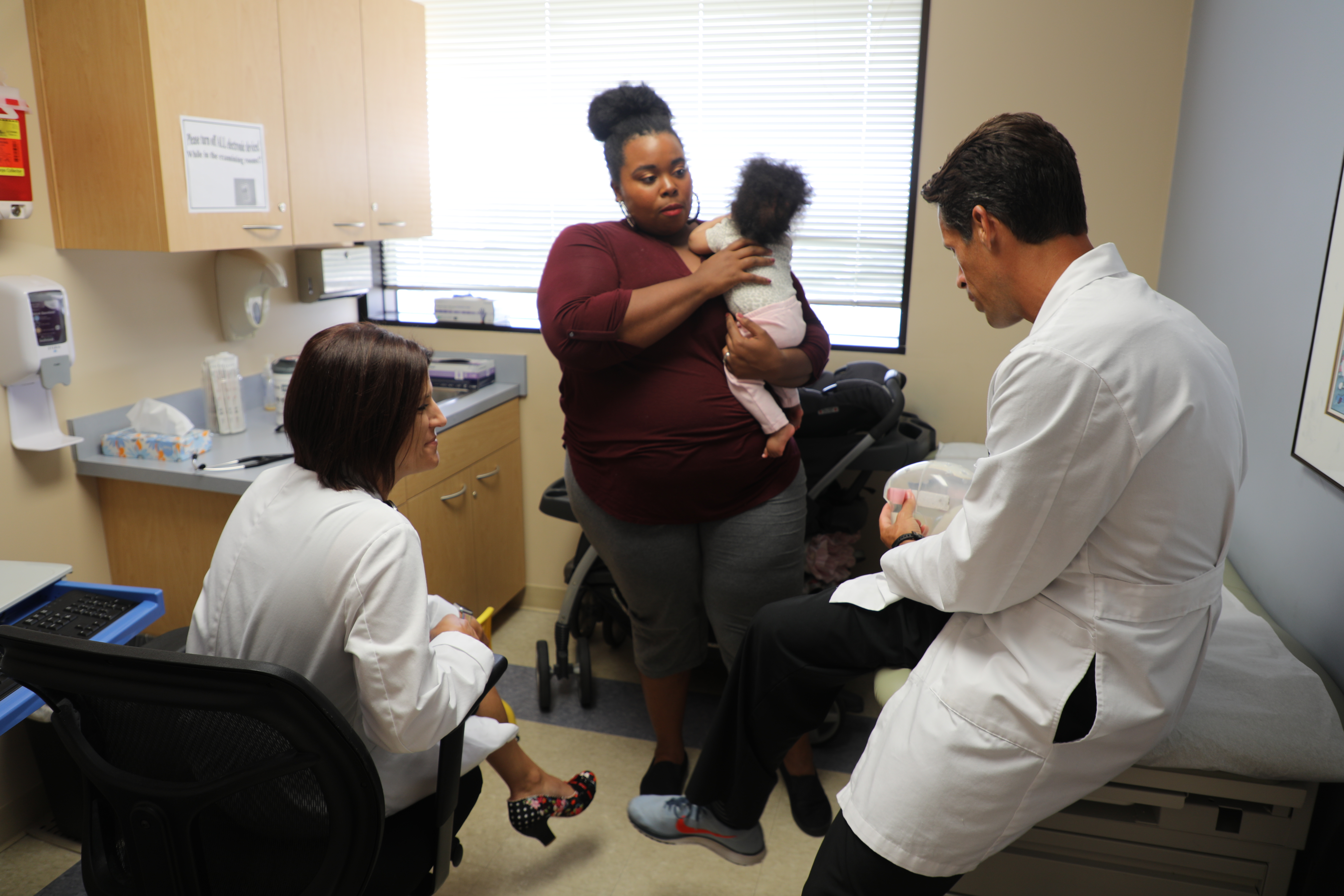 Now, Mya is full of giggles when she plays with her 3-year-old sister. That laughter is the sweetest song for Simmons.

For her pediatric neurosurgeons, Mya’s case shows the power of teamwork and revolutionary thinking.

“This is an example of an extremely rare clinical scenario involving a patient with complex neurosurgical diagnoses that we were, fortunately, able to successfully manage through a collaborative team-oriented approach here at Wolfson Children’s Hospital,” Dr. Ranalli added.