Jessica Ching, MD is rated at Stars from reviews

Jessica Allen Ching, M.D., is an assistant professor in division of plastic and reconstructive surgery at the UF College of Medicine.

Dr. Ching has authored several book chapters and articles in peer-reviewed medical journals, and she has presented her work at various professional conferences. She is also an invited expert for an international consensus panel on facial trauma in war and austere conditions.

Marissa and Jon Yeatman gave birth to a healthy baby boy named Nathaniel on Feb. 9, 2018, in Tallahassee, Florida. He was their second child and made their daughter a big sister, a position she was eager to take on.

Three days after his birth, Marissa and Jon took their baby to the pediatrician for his newborn checkup, and the doctor noticed an abnormality in the shape of Nathaniel’s skull.

“The pediatrician took pretty much one look at him and said, ‘Let’s take some X-rays,’” Marissa said.

Though Nathaniel’s head only had a mildly pinched appearance, his abnormal head shape foreshadowed a much more serious problem. Nathaniel was diagnosed with sagittal craniosynostosis, a birth defect in which one of the fibrous joints between the bones of Nathaniel’s skull closed prematurely before his brain was fully formed.

“Usually when you look at a newborn’s head on an X-ray, it looks like the skull is kind of shattered, but part of his looked like it was already formed and closed like an adult,” Marissa said.

Their pediatrician recommended Lance S. Governale, M.D., UF Health’s chief of pediatric neurosurgery who has a focus in craniosynostosis. The Yeatmans contacted him immediately, hoping to resolve the issue as quickly as possible.

Dr. Governale knew he needed to treat the problem early, so he scheduled the Yeatmans for an appointment close to their home at the UF Health Pediatric Specialties practice in Tallahassee.

“At that point, he was like new, new to the world,” Marissa said. “He was only about a month old. So, our options were kind of broadened, because we caught it so young.”

“The skull is made up of multiple different bones with sutures in between them,” Governale said. “Sutures allow the skull to grow. If they close early, it alters the head shape. In addition, suture closure can restrict skull growth while the brain is trying to grow leading to increased pressure.”

Craniosynostosis is typically treated surgically, due to the need to unlock the bones and reshape the skull. The traditional surgery, larger and more invasive, would probably require a blood transfusion and a longer hospital stay, but Dr. Governale was committed to offering minimally invasive options.

“One minimally invasive option consists of unlocking the bones through one or two small incisions with the assistance of an endoscope, and then using a helmet afterward to reshape the skull,” Governale said. “The downside is that the helmet has to be worn for 23 hours per day for upwards of nine months. It also requires regular visits to a helmet orthotist, who may not be located in the family’s region, like Tallahassee.”

Because of these issues, Dr. Governale and his pediatric craniofacial plastic surgery partner, Jessica A. Ching, M.D., introduced a second minimally invasive option to UF Health — cranial expander springs. With springs, a helmet is not required. UF Health Shands Children’s Hospital in Gainesville is the only site in Florida offering this newest treatment option.

Though she trusted the physician’s expertise, Marissa was relieved to feel as if she wasn’t forced into one specific treatment option for her baby boy. She felt that Dr. Governale let her have the final say.

That third, minimally invasive option for Nathaniel was the one that the nervous parents eventually chose.

In May of 2018, Nathaniel underwent craniosynostosis surgery with cranial expander spring implantation. Drs. Governale and Ching made one incision, used an endoscope to help open the sealed suture and then put in two cranial expander springs to reshape the skull. Three and a half months later, they went back in and took out the springs, completing the process — no helmet required.

A team approach is essential for treating craniosynostosis. The physicians work side-by-side to tailor the treatment to the patient and involve other specialists if needed, including ENT, oral surgery, dentistry, genetics, speech therapy, audiology, psychology and social work. Although Nathaniel did not need those additional specialists, he did have one more added benefit of Dr. Ching’s participation in the surgery — a beautiful closure with minimal scarring, something Marissa and Sean are very thankful for.

“She did an amazing job with all of his stitches and everything,” Marissa said. “The scar was actually, originally, a pretty odd U-shape. As his head is growing, it has started to stretch and look straighter. Already, you can’t see the incision that much.” 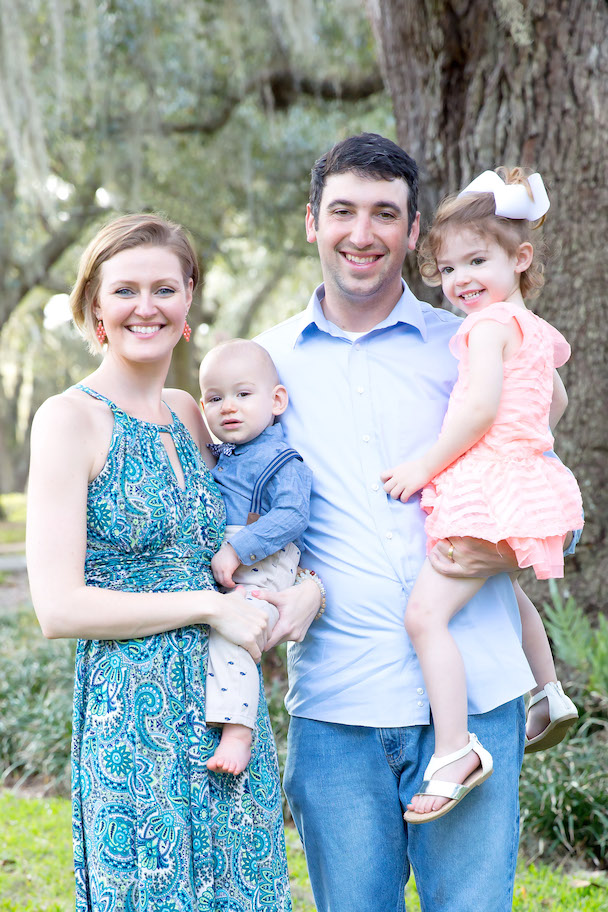 Today, Nathaniel is a healthy 1-year-old, and you can’t tell there was ever anything wrong with his skull.

“He had an excellent reshaping. His head looks normal now and is allowing his brain to grow,” Governale said. “We’ll be watching him, but hopefully, because he’s otherwise healthy, he won’t encounter additional issues.”

Nathaniel’s more focused on doing his favorite things, now that he doesn’t have to worry

about surgeries or doctors’ visits. His big sister is his greatest source of entertainment.

“He loves his sister. Hands down, she’s the one that can make him smile the most,” Marissa said. “Any time she gives him attention and plays with him, he’s just so happy. They’re cute together.”

Nathaniel started walking recently and is very mobile. He loves eating and playing with a li

ttle lion rattle. The lion has been with him from the day he was born through every surgery after that.

Like that little rattle, Marissa and Jon have been there the whole way, too, and have learned a lot through their hardest moments with Nathaniel. Marissa offers advice to other parents who are about to undertake their own harrowing journey with craniosynostosis.

“I would say don’t panic,” Marissa said. “You’ll get through this. Honestly, the doctors know exactly what they’re doing. Trust them.”

s for their children.

“It’s very, very scary seeing your newborn baby go into surgery,” Marissa said. “It’s just very difficult. When Nate was waking up after his first surgery, he was very fussy. That whole day he was fussy: upset, disoriented, crying. I was second guessing our decision while trying to comfort him. Then, the next day, he woke up and smiled and was suddenly completely himself again. Don’t second guess yourself. You know what’s right for your family and your child. It’s crazy how resilient children are.”