About the Craniosynostosis Program 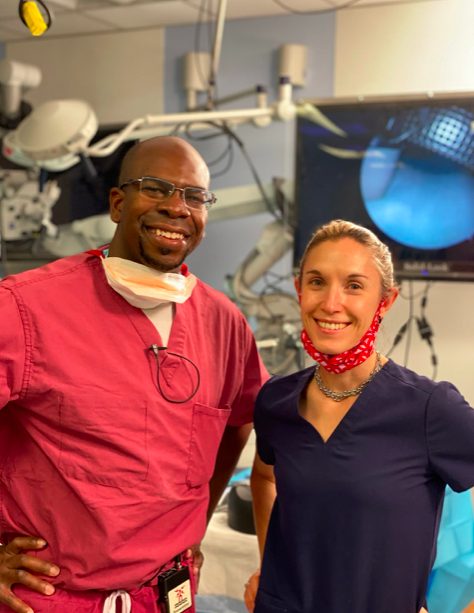 Directed by Dr. Caitlin Hoffman and Dr. Thomas Imahiyerobo, our Craniosynostosis Program offers expert, state-of-the art surgical solutions to every form of craniosynostosis and other craniofacial anomalies. As one of the most experienced surgical teams for craniosynostosis in the United States, we perform surgical corrections for craniosynostosis on a weekly basis. From early infancy and on, children diagnosed with craniosynostosis (single suture, multiple suture, syndromic, and non-syndromic) receive the most advanced care available. Calling on the expertise of top neurosurgeons and plastic surgeons from Weill Cornell Medicine and Columbia University, operating at the #1 hospital in New York, our program offers a wide range of options, including innovative endoscopic approaches that shorten hospital stays and reduce the risk of blood loss. As the largest regional pediatric neurosurgery service provider in the tristate area, we ensure unmatched clinical specialization and enhanced patient access. Working in tandem, our neurosurgeons and plastic surgeons produce excellent outcomes, with superior functional and cosmetic results.

From our extensive experience working with the craniofacial population, we know our patients often need support and care from multiple other subspecialties. Our ACPA-approved multidisciplinary craniofacial clinic ensures coordinated care from a full team of experts who specialize in:

The wellbeing of our patients and families comes first, and our team prides itself not only on its expertise, but also on its compassion, understanding, and empathetic care delivery. With a focus on transitional care, we ensure that patients’ needs are continuously met; specialized care does not stop as patients mature and reach adolescence and young adulthood. Please reach out to us to be seen at any of our locations.

The dedicated craniosynostosis team has performed hundreds of advanced surgical procedures, both open and endoscopic, and our surgeons appear on lists of Top Doctors, Best Doctors, and SuperDoctors. They are frequently invited to present at conferences and scientific meetings to share their expertise.

Our surgeons are also highly respected academics who are widely published in professional journals. Their craniosynostosis research has appeared in journals including the Journal of Neurosurgery Pediatrics, the Journal of Craniofacial Surgery, and Plastic and Reconstructive Surgery.

See some of their recent publications here:

A newborn’s skull is not one large bone — it is made up of several smaller bones that are held together by long elastic bands that allow the skull to expand as the brain grows rapidly during the first few years of life.  (You can feel where some of those individual bones meet at that “soft spot” on a baby’s head.) These connecting bands are called sutures, and they normally fuse (or close up) between the ages of one and three years.  In some children, one or more of the sutures fuse early; the premature closing of a suture prevents expansion in one direction and results in an abnormally shaped head as it compensates by expanding more in another direction.

Can craniosynostosis resolve on its own?

No, unfortunately it will not. Unlike plagiocephaly, which is the “flat head” that can occur in some babies and which usually resolves on its own, craniosynostosis can’t be left untreated. Opening the prematurely fused sutures to allow for normal expansion is the only way to treat it.

What is the surgery? Is it dangerous?

All surgery has some risk, of course, but in the hands of an experienced craniosynostosis surgical team the procedure is very safe. Traditional surgery for craniosynostosis is called cranial vault remodeling, in which the surgical team opens the fused suture and “remodels” the skull to the correct shape. A newer, endoscopic version of the surgery uses minimally invasive methods to open the suture, then the skull grows into the correct shape over the following months while the child wears a modeling helmet. Each child needs to be evaluated individually to see which surgical procedure is best.

What are the risks of not doing surgery?
Untreated craniosynostosis is not a minor cosmetic problem – it can create serious deformity as your baby’s brain continues to grow rapidly. A fused suture prevents the skull from expanding uniformly, and over time, the abnormality in the child’s head shape becomes more pronounced. Fused skull plates may also prevent the brain from growing and expanding, which creates pressure on the brain that can lead to seizures and permanent brain damage. Although every surgical procedure has some risk, the risks of not doing the surgery are considerable.

How long will my baby be in the hospital?

That usually depends on which kind of surgery your child has. Children are typically in the hospital for one night after and endoscopic procedure and two or three nights after cranial vault remodeling.

Will my baby have a scar?

Yes; however the scar will blend in once your child’s hair grows back. The incision in endoscopic surgery is only about 3 to 4 cm (about an inch and a half) long, over the affected suture. The incision in a cranial vault reconstruction goes from ear to ear in a zig-zag line.

Will my baby be in pain after the surgery?
Our patients’ comfort is a top priority. Pain is the body’s natural response to surgery, but we have many ways to keep your child comfortable, starting with IV pain medication immediately after the surgery.  As the recovery continues, the child is given Tylenol to prevent pain.

Will my child look different immediately after surgery?
Children who have traditional surgery (cranial vault remodeling) will look different right away, since the skull bones are moved into the correct position during the surgery. A baby who has  endoscopic surgery will not look different immediately after the surgery, since the suture has been opened but the bones have not been repositioned. After an endoscopic procedure, your baby will wear a helmet to guide the skull bones into place. The head shape will be corrected gradually, as the brain expands and the helmet does its job.

How many operations like this have you done?
At NewYork-Presbyterian we perform surgical corrections for craniosynostosis on a weekly basis, and we have been doing these surgeries for decades. We are experts in cranial vault remodeling, and we are leaders in the minimally invasive endoscopic suturectomy procedure. Other neurosurgeons and plastic surgeons from around the world come to our program for training in this procedure! We take a multidisciplinary approach to each patient, meaning that your child will have not only neurosurgeons and plastic surgeons available, but also other specialists in related disciplines who may contribute to your child’s treatment as needed.